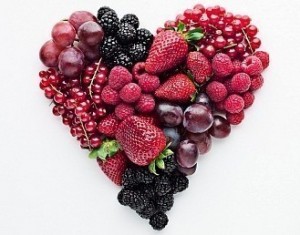 A berry is a fleshy fruit produced from a single ovary. Many fruits which we do not think of as berries are, technically speaking, berries. Some of the more odd examples of these are grapes, watermelon, pumpkin, bananas, and tomatoes.

In common usage, the term “berry” is used to describe any small edible fruit. Berries are most often juicy, round or semi-oblong, brightly colored, sweet or sour, and typically do not have a central stone or pit.

Some “berries” according to common usage:

Blackberries and raspberries are not true berries. Botanically they are known as aggregate fruits, because each is composed of smaller drupelets. These plants typically have biennial canes and perennial roots. They are also known by the names caneberries or brambles.

Hackberries are not true berries either. The fruit of a hackberry is a drupe, a fruit which is produced by a single-seeded ovary with a hard stony endocarp surrounding the seed. The most well-known drupe is the peach.

Members of the mulberry families are also not true berries. Mulberries start life as clusters of tiny separate flowers that later become compressed together as they mature.