Oscar Nominees List
Academy Award, known as Oscar, is a highly valued...
List of Presidents by Height
While this is more in the realm of trivia...
Alphabetical List of States
United States includes 50 states, which are listed here...
List of States Capitals
Australia, Mexico, and the United States all contain multiple...
List of High Protein Foods
High protein diets are useful for building muscle mass... 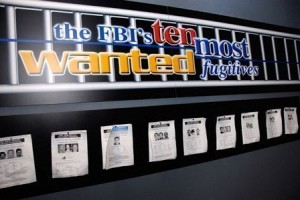 United States Federal Bureau of Investigation (FBI) maintains a list of 10 Most Wanted fugitives, which comprises of fugitives deemed most dangerous to society. The purpose of the list is to alert the public of potential danger coming from fugitives at large, and enable the public to help FBI apprehend them by providing feedback as to their whereabouts or any other information they may be able to provide. The list also puts pressure on fugitives themselves, which caused some to turn themselves in upon finding out they’ve been put on the list.

Capture, pardon or death results in removal from the list, in which case the name is replaced by another fugitive deemed dangerous enough or important enough to alert the public about. While the list contains only ten names the FBI sometimes adds a “Number Eleven” when they have an individual deemed extremely dangerous, but don’t think any of the existing ten should yet be removed.

The list was first published on March 14, 1950, and was a result of a conversation between an FBI Director J. Edgar Hoover, and an International News Service (now known as United Press International) Editor-in-Chief William Kinsey Hutchinson about ways of promoting the capture of FBI’s “toughest guys”. The conversation resulted in a published paper whose overwhelmingly positive reception caused FBI to start publishing the list.

The list is available in public places such as post offices, as well as online at the FBI’s Ten Most Wanted page.

After the terrorist attacks of September 11, 2001, FBI also started a list of Most Wanted Terrorists for those fugitives which have been indicted for alleged crimes of terrorism. The list was first published on October 10, 2001 by the former US President George Bush Jr., and contained 22 names whom were already in the list of fugitives. Osama Bin Laden was among them, and was previously also listed among the top Ten Most Wanted fugitives.

This list can also be found online at the FBI’s Most Wanted Terrorists page.